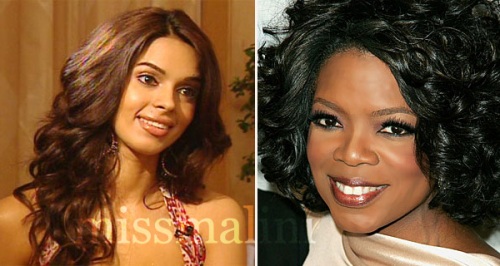 Bad news folks, TV show hostess Oprah Winfrey has canceled her hush-hush trip to India (she was to arrive yesterday in Goa at 7am and then go onto Hampi from there.) Strangely enough Oprah was scheduled to travel with (the unabashedly vapid) Mallika Sherawat, who’s been away in the US for the last couple of months. I hear Oprah and Mallika are Twitter buddies too! (Wow can you just imagine the conversations they’d have? Boggles the mind.)

Oprah Winfrey met Mallika in Los Angeles and they got along very well. Mallika even managed to plug her next release Hissss, the post-production of which is currently on in LA. It was during one of their chats that Oprah Admitted her fascination for the monkey God Hanuman and how she had read about his strength and valor. Mallika, in turn, spoke to Oprah about Hanuman’s birthplace (Hampi in Karnataka.) Before you start marveling at the extent of her knowledge the reason she knows the place at all is because she shot there for Jackie Chan’s The Myth. Winfrey expressed her desire to visit Hampi and Goa and Mallika offered to be her tour guide. Everything was  set and while Mallika landed in Goa yesterday, Oprah, who was to come in a private jet had to change her plans at the last minute because of the swine flu scare across USA.

Oprah was advised by her agents and the American consulate not to travel any-where out of the country as she might not be able to come back on time due to travel restrictions that might come into play if the pandemic worsens. Evidentally Mallika is disappointed at the turn of events but  still quite hopeful that when all the hullabaloo about the swine flu dies down, Oprah will be able to come to visit her in India soon. Awwww.

7 responses to “Mallika and Oprah BFFs?”